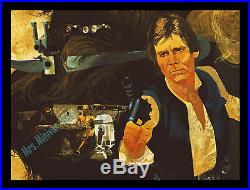 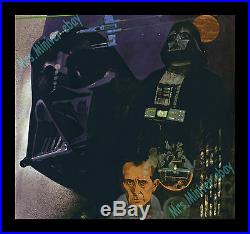 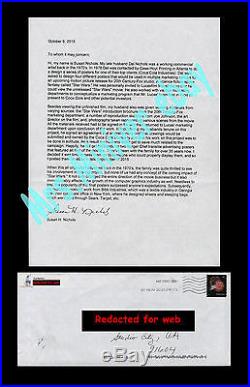 FROM THE PRESTIGIOUS DEL NICHOLS ARTIST COLLECTION. Up for sale here is one of the RAREST, nicest -and- most important early Star Wars advertising pieces out there: An ORIGINAL 1977 Star Wars Burger Chef Coca-Cola TRANSLITE MOVIE POSTER DISPLAY SIGN. This is the amazingly rare (13.5x28.5 inch) translite (or tanslight) made to advertise the wildly popular Coca-Cola / Star Wars / Burger Chef movie poster offer. They ran this promotion when the film was in its first theatrical release. Burger King, Burger Chef's sister company at the time, also ran the same campaign.

If you're an advanced Star Wars collector you know how rare this store display is. You won't find another available anywhere!

You can't even find a picture of it on the web. Additionally, this more than colorful sign has a special provenance and linage that truly makes it a 1-of-a-kind museum piece. It's from the personal collection of the late artist, Del Nichols, who did the artwork on the posters advertised on it.

It was obtained directly from his wife, Susan Nichols, who wrote and hand signed a letter of provenance that accompanies this lot (see photo #6). Also, a copy of Del's obituary that Susan provided comes with this lot too (see photo #7). This poster campaign was the most successful poster premium campaign in US history. Except for the Hildebrandt Brothers famous Star Wars pop poster (issued that same year), there were more Del Nichols Star Wars posters dispersed during this campaign than any other posters. At any other time in world history!

And yes, that includes the famous James Montgomery Flagg "Uncle Sam Wants You" poster and the hard-bodied Farrah Fawcett pinup. Susan lays out a lot of the story behind this remarkable piece in her letter. To make it easier to read, I've typed out the body of the text here. To whom it may concern. Hi, my name is Susan Nichols.

My late husband Del Nichols was a working commercial artist back in the 1970's. In 1976 Del was contacted by Case-Hoyt Printing in Atlanta to do a design for a series of posters for one of their top clients (Coca Cola Industries).

Del was asked to design four different posters that would be used in multiple marketing venues for an upcoming motion picture release for 20th Century-Fox studio; A science fiction space fantasy called Star Wars. " He was personally invited to Lucasfilm Industries so that he could view the unreleased "Star Wars movie. He also worked with various marketing departments to conceptualize a marketing program that Mr.

Lucas' team had in mind to present to Coca Cola and other potential investors. Besides viewing the unfinished film, my husband also was given working materials from varying sources: the "Star Wars" introduction brochure from the 20th Century-Fox marketing department, a number of reproduction sketches from Joe Johnson, the art director on the film, and, photographs taken representing various scenes from the movie.

In fact, during my husbands tenure on this project, he signed an agreement that all preliminary and final drawings would be submitted and owned by the Coca Cola Company and that his work on this project was to be done in solitude. As a result my husband didn't get to save much related to the campaign. Happily, he did get his hands on two Burger Chef translite advertising posters that featured all four of the posters. They've been with the family for over 35 years now. When this all originally happened back in the 1970's, the family was quite thrilled to see his involvement in this big project, but none of us had any concept of the coming impact of Star Wars. It not only changed the entire direction of the movie business but it also immeasurably affected the growth of the computer graphics industry as well. Needless to say, the popularity of the final posters surpassed anyones expectations. Needless to say this piece is historic! The condition of this item is fantastic! The colors are stellar and it displays extremely fresh. I went to great lengths and expense to have a professional direct scan made of this item WITH backlighting, as if it were in the translite display case.

The only defect worth mentioning is a tiny sliver of an edge that has cracked off (see bottom left corner). There are a couple of extremely tiny pinholes where it once hung, but they are near invisible. I hope this finds a nice home. Also, for you Star Wars rarity collectors - I have some 1970's Kenner Toy displays and a bin up now.

I also have very rare 1978 Star Wars posters and Glasses Mobiles, a rare posters translite and a 1980 BURGER KING EMPIRE STRIKES BACK 4-GLASSES 4-WEEKS COUNTDOWN POSTER DISPLAY CARD. These BK pieces would be a proud addition to any well-developed Star Wars poster and/or display collection, as either one qualifies in both categories of collecting. If you're looking for an investment/museum quality item. Ben Obi-Wan Kenobi Anthony Daniels.... It can crash regardless of any decision you make and can even crash regardless of any decision made by the company related to the stock - Leaving you with a near worthless piece of paper that won't inspire anyone!

The item "1977 STAR WARS BURGER CHEF COCA-COLA Translite MOVIE POSTER DISPLAY! RARE" is in sale since Tuesday, July 14, 2020. This item is in the category "Collectibles\Advertising\Restaurants & Fast Food\Burger King".miniver" and is located in Studio City, California.