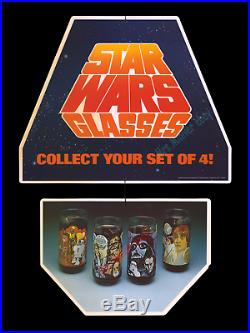 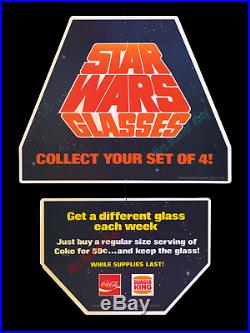 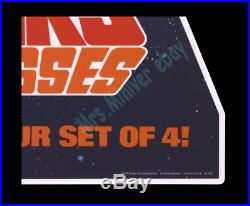 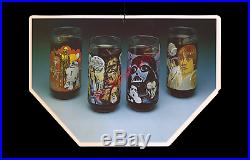 You might want to check that mobile out too, as a possible companion to this item, or, to at least compare the photos to see the important telltale differences, like the 1978 date and much later product number. Nevertheless, this 2-piece 1977 beauty has only been spotted a couple of times over the past several decades, and, that was only within the pool of the most elite and advanced of the hardcore Star Wars foodie display collectors. They track all this stuff.

In other words, I've confirmed that this one is indeed a true RARITY! You won't find another available anywhere worldwide. I've seen photos of the two other examples I mentioned above.

That's it, I know of three. That's rare by anyone's measurement. Not only is this mobile rare, it's fundamentally one of the best Star Wars product advertising pieces ever created. It was designed to promote the beginning of the wildly successful Del Nichols Star Wars BK/Coke glasses campaign. Certainly, this Star Wars glasses promotion, and, the matching Del Nichols Star Wars BK/Coke posters campaign were among the most successful movie tie-ins ever launched here in America during the 20th Century. This boldly designed 2-piece mobile measures 24 inches tall (not including the string at the top) by 17 inches wide. It's made of stiff plastic and has printing on both sides. It has great spinning action, and, it's in FANTASTIC ORIGINAL CONDITION! It's just as it was taken down in 1977. It's not perfect mint, but it's very solid and extremely nice! I've posted professional direct high-res scans of the mobile so you can see exactly what it looks like. The photos leave nothing to the imagination. The string at the top will not reach the ceiling, but it's still two or three inches long, and so it would be very easy to tie another string to it (for knots consult the Boy Scout manual). There is a small chip in the white plastic in the far right white margin near the Luke Skywalker glass. It's only in the white edge, and, there are only general signs of slight discoloration or "age" throughout this piece, otherwise it's like new. All the metal eyelets designed to support the string are intact and perfect.

The original string stills holds the mobile together. You may want to replace the string if you're going to hang this on display for any length of time, as the string on this display is 40 years old and may break over time because of becoming brittle with age. If you're looking for an investment/museum quality item.

Ben Obi-Wan Kenobi Anthony Daniels.... It can crash regardless of any decision you make and can even crash regardless of any decision made by the company related to the stock - Leaving you with a near worthless piece of paper that won't inspire anyone! The magnificence of art and historic documents have an inherent value that relates to civilization and society. Please write with any questions. If you're in the market for top quality original vintage movie posters or Star Wars, then please. The item "1977 STAR WARS Coca-Cola BURGER KING STORE DISPLAY MOVIE POSTER GLASSES MOBILE" is in sale since Tuesday, July 14, 2020. This item is in the category "Collectibles\Advertising\Restaurants & Fast Food\Burger King".miniver" and is located in Studio City, California. This item can be shipped worldwide.