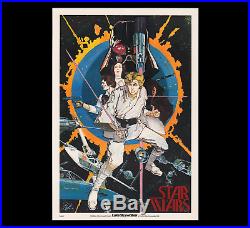 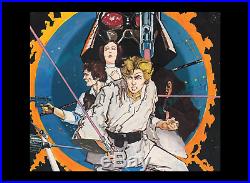 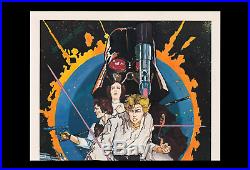 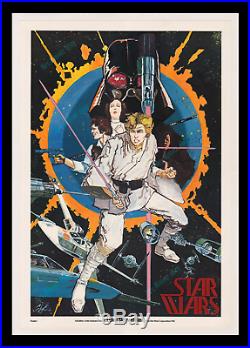 CORONAVIRUS PANIC SCARE BLOWOUT SALE. The entire poster world is in a Coronavirus panic scare. Sales are way down while everyone is finger pointing. In light of the sudden-death armageddon that has been thrust upon us, I've decided to blow this poster OUT with an equally dramatic price drop. I normally would never do this but since the end is near I feel I have no choice, and so now is your chance to get this at a tiny dot fraction of what it's worth! Lest we forget that the end was near with Y2K, 911.

Ebola, SARS, the hokey pokey, and, the Andromeda Strain! So get this now if you can muster the strength or nerve.

1st STAR WARS PRODUCT -or- POSTER OF ANY KIND! This GENUINE ORIGINAL 1976 Howard Chaykin Star Wars poster has risen to the heights of being one of the most valued and sought after movie posters of all time.

The release of it in 1976 also marked the beginning of the campaign to market, or publicize, the film to potential moviegoers. This isn't only "Poster 1" it's Product 1. In my opinion, that's a very BIG deal.

THE LAUNCH OF STAR WARS TO THE PUBLIC. Before Star Wars was released, almost a year before the film was finished, George Lucas personally commissioned noted artist Howard Chaykin to render this poster and a new Marvel comic book series based on the Star Wars screenplay. Gary Kurtz, Star Wars producer, and, Howard Chaykin were sent to the Comic Con and the Worldcon Science Fiction conventions in 1976 with a stack of these posters and a flyer to promote the upcoming film. It's been said that there were only 1000 Star Wars Chaykin posters originally printed. More than four decades later, the poster has certainly held it's rarity, and so the limited 1000 piece print-run number is probably an accurate one. The poster was never printed again in any official capacity, and so the only originals were made in 1976. Interestingly, this poster proudly says, "Poster 1" in the bottom left corner as part of its design (see photos #1, 4 and 5). This indicates a series of Star Wars posters to come, but there never was a "Poster 2, " because Lucasfilm a. You have to remember; Star Wars was a completely original cinematic creation. It wasn't a derivative of classic literature, like 2001: A Space Odyssey, and so the general public had no idea what it was about or how impactful the film would become.

In other words, the pre-release poster sales bombed! Very few were distributed and most of the ones that were bought got simply pinned-up or taped to walls. Subsequently, finding this poster now, especially in great shape, has become extremely difficult. It's part of the reason as to why it's become recognized today as one of the most sought after Star Wars and/or movie related collectibles on the market. The poster measures approximately 20x29 inches and is in.

SOLID C-9 NearMINT ROLLED NEVER-FOLDED ARCHIVAL MUSEUM LINEN-MOUNTED CONDITION. They leave nothing to the imagination. This poster has been perfectly protected since 1976 and has recently been Archivally Museum Linen-mounted to flatten it out and to protect it from damage, so it can be framed properly.

It worked like a charm because the poster came out terrific! I used the best conservator in the USA. He ONLY uses high-grade materials, such as thicker linen and thicker acid-free Japanese rice paper. The better materials cost more but make a real difference in the end result. It's flat as a pancake, even flatter, and, it's as nice as can be.

A finer Star Wars poster display would be hard to get. Is an accepted form of poster preservation by the Library of Congress and every Museum in the country. A lot of advanced poster buyers request and prefer linen-mounted posters because it makes framing and displaying the posters much easier - without the risk of damaging the original. The white you see in the photos - beyond that of the poster. Is the white of the Japanese paper lining the linen border margin.

The item "CORONA PANICSCARE 1976 HOWARD CHAYKIN 1st STAR WARS Movie Poster FIRESALE" is in sale since Thursday, March 12, 2020. This item is in the category "Entertainment Memorabilia\Movie Memorabilia\Posters\Originals-United States\1970-79".miniver" and is located in Studio City, California.