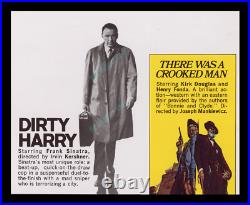 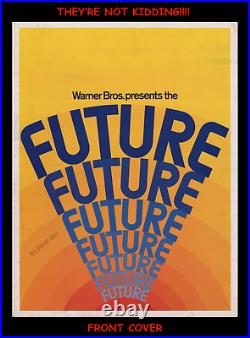 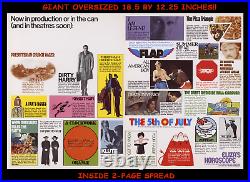 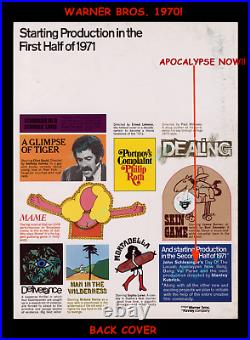 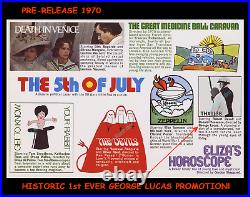 RARE 1970 APOCALYPSE NOW PROMOTION! You want an important and RARE Hollywood artifact, well, here it is! Get much rarer or much more interesting than this 1970 advance brochure issued by Warner Brothers studio nearly 50 years ago. The cover proudly and boldly announces that Warner Bros. They weren't kidding, as there's a cornucopia of amazing future Hollywood legends and legendary productions promoted on this INDUSTRY ONLY studio brochure the first time. Obviously, the Dirty Harry promo is remarkable for many reasons. Check out the image of its star, Clint Eastwood!

He looks a lot like Frank Sinatra. Oh, my bad - it. What a rarity, as this is the only promotional piece to picture the crooning legend as what has now become one of Hollywood's most famous roles - DIRTY HARRY!

Remember, this is a 1970 pre-release piece. What a franchise Dirty Harry has become, and this is its storied beginning! It's also George Lucas' storied beginning , as it's the first promotion with his name on it. THX1138 was Lucas' first outing in Hollywood. It's also Robert Duval's first film as the lead star. The brochure also mentions the film that Lucas was to direct as a followup to THX1138, Apocalypse Now. We all know that took another decade to make, but this is it's first official promotion.

There's a TON of other incredible stuff mentioned on this brochure as well, like Stanley Kubrick's A Clockwork Orange, Deliverance, Omega Man, and Klute. I got the below info on George Lucas' connection with Apocalypse Now off the TMC official website. The project began with George Lucas's plans to direct a script written by John Milius in 1969 entitled The Psychedelic Soldier, with Coppola as executive producer. Lucas had planned to shoot his film as a faux documentary on location in South Vietnam while the war was still underway.

But a production deal with Warner Bros. Fell through, and Coppola moved on to co-write and direct The Godfather (1972). The huge success of this Oscar®-winning film gave him the clout to reintroduce the idea of Apocalypse Now, which would be filmed by Coppola's own American Zoetrope Studios for United Artists, on location in the Philippines. I give a 100% GUARANTEE on the AUTHENTICITY!

The magnificence of art and historic documents have an inherent value that relates to civilization and society. This bit of Hollywood history is definitely ECONOMY PROOF!

Please write with any questions. If you're in the market for top quality original vintage movie posters or Star Wars, then please. The item "FRANK SINATRA AS DIRTY HARRY 1st PROMOTION of Star Wars' GEORGE LUCAS WB1970" is in sale since Tuesday, July 14, 2020. This item is in the category "Entertainment Memorabilia\Movie Memorabilia\Posters\Originals-United States\1970-79".miniver" and is located in Studio City, California.