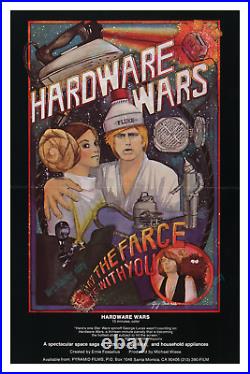 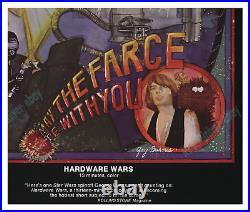 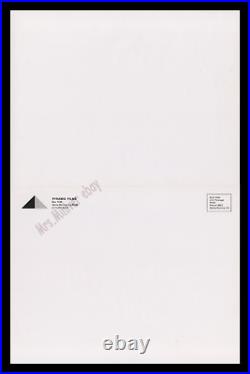 MAY THE FARCE BE WITH YOU! YOU'LL LAUGH, YOU'LL CRY, YOU'LL KISS 3 BUCKS GOODBYE! One of the most fun and important Star Wars related movie posters ever created: An Original 1978 "Hardware Wars" Movie Poster!

If you're a Star Wars fan you know this film. It's the hilarious short-subject spoof made back in 1978 by loving fans and filmmakers Ernie Fosselius and Michael Wiese. This movie is notable for many reasons. First and foremost - IT'S GREAT! As a result of such, "Hardware Wars" is now recognized as the most successful short film of all time. It won numerous awards, the most notable being George Lucas' award of personal approval. In 1999, Lucas spoke out on British TV Chanel 4's The Big Breakfast. " He unequivocally declared "Hardware Wars" his favorite "Star Wars parody. He followed the statement up with action in 2003 when Lucasfilm awarded the movie with its prestigious Pioneer Award. The poster features the wonderful artwork of Gay Barnes. This RARE ORIGINAL 1978 advertising poster issued by Pyramid Films, the company that distributed the movie. The poster measures 11x17 inches and was issued with only one horizontal fold.

This was how this poster was distributed to the theaters. It was either sent inside of the film case with the actual short subject mailed to the theater, or the poster was mailed directly to the theater as a promotion to the manager who books the films. I've posted high resolution scans of the front and back of the poster so you can see how nice this rare one really is.

This item is in the category "Entertainment Memorabilia\Movie Memorabilia\Posters\Originals-United States\1970-79".miniver" and is located in this country: US.