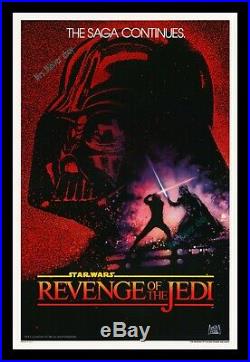 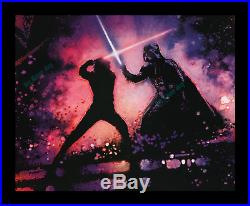 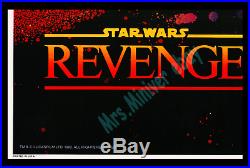 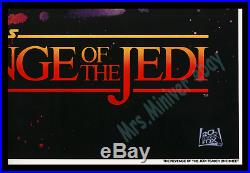 PANIC SALE BELOW COST BLOWOUT. A recent MEDIA fiasco has decimated my poster business. Sales are way down while everyone is finger pointing. In light of the sudden-death armageddon that has presented itself, I've decided to blow this poster OUT with an equally dramatic price drop.

I normally would never do this, but since the end is near I feel I have no choice, and so now is your chance to get this at a tiny dot fraction of what it's worth! That has effected me will not last forever. Lest we forget that the end was near with Y2K, 911. Ebola, SARS, the hokey pokey, and, the Andromeda Strain! So get this now if you can muster the strength or courage.

THIS IS AN ORIGINAL- BEWARE OF FAKES! I've decided to sell this poster, my last.

Unbacked rolled Revenge No Date 1-sheet. In the UK (lot 151)! THE HOLY GRAIL OF Star Wars 1-Sheets! A GENUINE, ORIGINAL rolled 1982 Fox issued Revenge of the Jedi Advance one sheet.

It's NOT a reprint, and, it's NOT a bootleg, this is the REAL McCoy. The Revenge one-sheet is the most copied, commemorated, and, the most counterfeited movie poster in the world! That's because it's so great! It's always been a huge demand item - the unbelievable artwork by Drew Struzan, coupled with the film's "politically correct" title change, make this one for the record books. It's a dream, or, Holy Grail item. Fox issued this Teaser back in 1982. There were TWO versions printed. Both are documented on the 1985 Lucasfilm authorized Star Wars Checklist poster. The FIRST version was printed only once - that's the NO-DATE version offered here in this listing. It was exclusively issued to the movie theaters - early on - BEFORE 20th-Century-Fox settled on a certain release date for the film. The SECOND version was printed after the finalization of the May 25th 1983 release date, which was placed at the bottom of the poster. The first NO-DATE version is SIGNIFICANTLY rarer.

The story gets even better! After going through the trouble of printing both versions of the poster, George Lucas had an eleventh hour epiphany when he suddenly realized how silly it would be for a Jedi to loose his cool seeking REVENGE, and so he changed the title of the movie to The Return of the Jedi. " Immediately, all the original "Revenge posters (date and no-date) were pulled from the official advertising campaign. This particular NO-DATE original has been coveted ever since all that hubbub initially happened. This fantastic rarity is in. AMAZING IMPOSSIBLE TO FIND ROLLED NEVER-FOLDED EXTRA FINE+++ to NearMINT UNRESTORED UNBACKED ORIGINAL CONDITION! I have NEVER seen a perfect mint rolled Revenge No-Date.

It's FLAT as a pancake. It will re-flatten out again in a day or so once you open the package. If you've been looking for a Revenge of the Jedi NO-DATE 1-sheet poster - make sure it's indeed an original. Get it from a genuine Star Wars poster expert. I admit my prices are somewhat advanced, but the service and guarantee I provide is equally advanced.

I'm a well-known expert. In fact, I'm the #1 genuine Star Wars poster expert in the world! Additionally, I fully designed and authored a Star Wars poster-collecting guide back in 1999 - It was published by Butterfields. I'm credited in the front of the guide. I offer that guide with some of my listings see a photo of it in my listing with the. 1976 ORIGINAL Star Wars Corporation FLYER. I point this out because I want you to know that I can definitely authenticate Star Wars posters with 100% accuracy. THIS POSTER IS THE REAL DEAL. To BEWARE of any dealer who advertises a Star Wars poster as a bootleg. These are greedy dealers who think it's OK to destroy the hobby by circulating bootlegs because they tell you upfront that it's a bootleg.

I wouldn't trust them unless they stamped the FRONT of the poster with a mark that clearly states, BOOTLEG! - like they do with fake coins and currencies in that well-established hobby. Help stop this criminality - speak out! I 100% guarantee the authenticity of this poster. And - ALL MY OTHER VINTAGE OFFERINGS!! 100% GUARANTEED ORIGINAL THEATRICAL POSTER!! Han Solo Billy Dee Williams....

If you're in the market for top quality original vintage movie posters or Star Wars, then please. The item "PANICSALE BELOW COST! REVENGE OF THE JEDI NO-DATE ROLD Star Wars MOVIE POSTER" is in sale since Sunday, March 15, 2020. This item is in the category "Entertainment Memorabilia\Movie Memorabilia\Posters\Originals-United States\1980-89".miniver" and is located in Studio City, California.