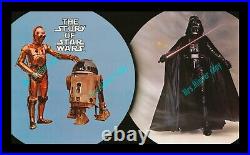 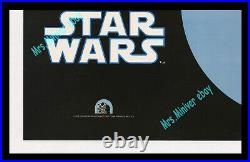 Most hard-core Star Wars collectors don't know about this 1970's treasure. That's because they've never seen it anywhere. I first became aware of this poster only about 15 years ago. I've finally made a professional quality scan of the poster, and so now I'm willing to offer this out for sale. I promised myself I wouldn't let it go without having a high-resolution scan.

This unique poster is advertising two of the quintessential 1970's products: The Picture Disc and The Story of Star Wars. The picture Disc was a real interesting phenomenon that emerged in the 1970's, right at the peak of when vinyl LP records ruled the music business. That just so happened to coincide with Star Wars and its initial launch, which subsequently became rule over the movie business. Fans were so hungry for Star Wars product at the time that 20th Century-Fox decided to release a condensed audio version of Star Wars as a consumer record album, The Story of Star Wars. It was so successful they decided to make a collector's Picture Disc of it. This poster was made to advertise the Picture Disc in the record shops. VERY few posters were distributed and even fewer survived. In my nearly 40 years of collecting, I've only seen three of these originals. Just a couple years after this poster was made the Picture Disc fell by the waste-side. The compact disc was introduced to the public in 1980 and the vinyl record business was put out of business, practically overnight. This poster is a great reminder of the good old 1970's and a stellar Star Wars piece. This poster was issued approximately 18 inches by 36 inches. The poster was also designed and printed WITHOUT a white border. They call that a full "Bleed" in the advertising industry. It worked like a charm because the poster came out perfectly! I used the best conservator in the USA. He ONLY uses high-grade materials, such as thicker linen and thicker acid-free Japanese rice paper. The better materials cost more but make a real difference in the end result. It's flat as a pancake and as clean as can be.

Is an accepted form of poster preservation by the Library of Congress and every Museum in the country. A lot of advanced poster buyers request and prefer linen-mounted posters because it makes framing and displaying the posters much easier - ESPECIALLY on borderless posters. As I pointed out, this poster was made with a BLACK border only.

The white you see in the photo is the white of the Japanese paper lining the linen border margin. You can see how easy it would be to damage the original poster without that extra margin of protection. The backing makes the poster much safer to handle - it GREATLY reduces the risk of damaging the original. Also, all of my linen-backed posters have been stored FLAT so they DO NOT have a curl to them - They're ready for framing and display! This poster will be sent in a special crush-proof tube.

Darth Vader James Earl Jones.... It can crash regardless of any decision you make and can even crash regardless of any decision made by the company related to the stock - Leaving you with a near worthless piece of paper that won't inspire anyone! The magnificence of art and historic documents have an inherent value that relates to civilization and society. Please write with any questions. If you're in the market for top quality original vintage movie posters or Star Wars, then please. This item is in the category "Entertainment Memorabilia\Movie Memorabilia\Posters\Originals-United States\1970-79".miniver" and is located in this country: US. This item can be shipped worldwide.