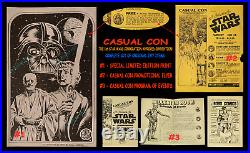 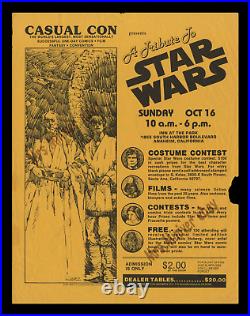 THE 1st STAR WARS CONVENTION! GEORGE LUCAS & CHARLES LIPPINCOTT SANCTIONED! Here's a lot of RARE 1977 Star Wars MUST HAVE items including an impossible to get Rick Hobart Star Wars poster given as a prize at the very first Star Wars convention, the Casual Con! The Casual Con was an official Star Wars sanctioned event.

It was held with the cooperation of George Lucas and The Star Wars Corporation. In fact, the legendary film publicist Charles Lippincott arranged a special behind-the-scenes Star Wars slideshow for this event. He's even credited with arranging such in the program (see photo#3).

Vice president of advertising, publicity, promotion and merchandising for The Star Wars Corporation when the film first broke in 1977. In this lot you get the entire set of THREE (3) original Casual Con items that were obtained back in October of 1977. #1 - A special limited edition Rick Hoberg poster that was given to the first 100 attendees of the convention.

This litho is impossible to get. You won't find another one anywhere. Heck, it's soooo rare that you won't even be able to find a photo of one on the web, no matter how extensive you may search, and so you know this is an elusive item! Rick Hobert is best known as a cover artist for the 1970's Star Wars Marvel comic book series.

The success of the Star Wars movie tie-in comic is now credited with saving Marvel from going out of business. This litho measures approximately 11 inches by 6.5 inches. #2 - Casual Con Advance Promotional Flyer. It's an essential companion piece to the poster, as it. Spells out its provenance: the fact that this litho was given out to the first 100 attendees of the Casual Con show back in October of 1977.

The program also credits George Lucas and Charles Lippincott personally. This lot was saved by one of the lucky attendees of the show. The 45-year-old poster shows signs of age, but is still very solid. The program was barely looked at and has remained in fantastic - nearly unused - condition.

Any way you cut it, this lot is about as rare as it gets. You won't find another set, or even the individual counterparts. In recent years, I've seen bootleg fakes of the program and the flyer, and so BEWARE of those two if you do ever see them. To date, I haven't seen any bootlegs of the poster. If you're into early Star Wars or rare Star Wars posters - THIS IS A MUST HAVE LOT!

THIS LOT WILL BE PROFESSIONALLY PACKAGED SO IT WILL ARRIVE UNDAMAGED! Ben Obi-Wan Kenobi Anthony Daniels.... It can crash regardless of any decision you make and can even crash regardless of any decision made by the company related to the stock - Leaving you with a near worthless piece of paper that won't inspire anyone! The magnificence of art and historic documents have an inherent value that relates to civilization and society. This Star Wars lot is definitely ECONOMY PROOF!

Please write with any questions. If you are in the market for top quality original vintage movie posters or Star Wars, then please. This item is in the category "Entertainment Memorabilia\Movie Memorabilia\Posters\Originals-United States\1970-79".miniver" and is located in this country: US.