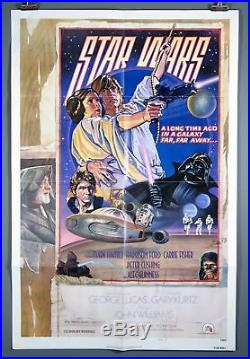 It was created by Charlie White III and Drew Struzan. Struzan is one of the most prolific Star Wars painters for. Lucasfilm creating more posters, book covers, and various other artwork. This Style D poster is one of George Lucus' favorite designs to date. The original artwork for it is said to be hung in Lucas' house.

He liked the circus poster feel of it. The poster looks like it is peeling back to reveal a wood fence underneath. It is one of the few posters to feature the Jawas, the landspeeder, and the stormtroopers, not to mention Darth Vader with a Dracula-type cape. The novel idea of making the poster appear as if it were pasted on a wall came about almost by accident.

"We had already done the lettering of the title, painting it in as part of the poster, " recalled Struzan. Then, when we got the billing, we discovered there wasn't enough room for all the credits, so we had to figure out a way to make more space.

We thought,'Why don't we take what we already have and paint it to look like it's wild posted on top of other posters? That gave us the extra room we needed for the billing at the bottom. It was a case of Necessity being the Mother of Invention.

We had to do other art to fill it out, so we had a chance to include more characters. We added Han Solo in a little vignetted circle, and Alec Guiness was an afterthought. It kind of grew to include everybody.

Looking for a certain poster? The item "Star Wars, A New Hope, Original 1978 Poster 27x41 D" is in sale since Friday, January 28, 2011. This item is in the category "Entertainment Memorabilia\Movie Memorabilia\Posters\Originals-United States\1970-79".