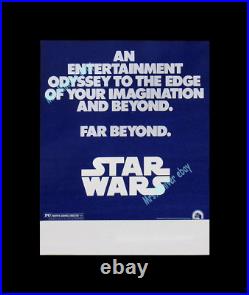 ORIGINAL STAR WARS 1977 ADVANCE MINI-WINDOW MOVIE POSTER! Sought after Star Wars originals, as it was only used in the early days of the first 1977 campaign. 20th Century-Fox and The Star Wars Corporation distributed this little gem.

The original 20th Century-Fox 1976 dated Star Wars press book instructs theater managers to wild post in and around campuses; on bulletin boards, in meeting halls, cafeterias, bookstores, music shops, everywhere students congregate. This scarce ADVANCE mini window poster was used for that exact purpose, as well as being displayed at the movie theater ticket counters and distributed by the theaters to their patrons to announce the film is coming. It was also issued in early pre-release Press Kits! When Fox began to market Star Wars in early 1977, they could not decide on how to market the film. Mark Hamill did a QVC television program on Oct.

28, 1992 and was quoted to say, When [Star Wars] opened we didn't have any posters--we just had photographs outside the building. " He elaborates by saying that, "Fox wasn't sure what campaign to go with--an adventure, a 2001 odyssey, etc. The mini window poster/herald offered here demonstrates nicely that early Star Wars campaign that was scrubbed. The wordy Teaser speaks of "Imagination" but does not deliver. Needless to say, t his "Odyssey" style poster was dropped from the campaign early on before the film's release. It was ONLY made in this mini window and jumbo (84x91 inch) 7-sheet size. The final version of a teaser made for the Star Wars campaign, taken from the film's lead-in, was only ready shortly before the May 25th release date in 1977. Have been used by the motion picture industry since the silent movie days. Not all films released had mini window posters. Mostly big films such as The Wizard of Oz, King Kong, Casablanca, all the way to 2001: A Space Odyssey used mini window posters.

They're among the rarest of all posters made, MUCH RARER than the one sheets! Most of these were tossed out. No Star Wars poster collection is complete without this! This poster is in glorious MINT/NearMINT UNUSED ORIGINAL UNRESTORED CONDITION!!

The poster measures 9 1/2 x 7 1/2. The poster is printed on regular poster paper. If you're looking for an investment/museum quality items. Ben Obi-Wan Kenobi Anthony Daniels.... It can crash regardless of any decision you make and can even crash regardless of any decision made by the company related to the stock - Leaving you with a near worthless piece of paper that won't inspire anyone!

The magnificence of art and historic documents have an inherent value that relates to civilization and society. Please write with any questions. If you're in the market for top quality original vintage movie posters or Star Wars, then please. This item is in the category "Entertainment Memorabilia\Movie Memorabilia\Posters\Originals-United States\1970-79".miniver" and is located in this country: US.