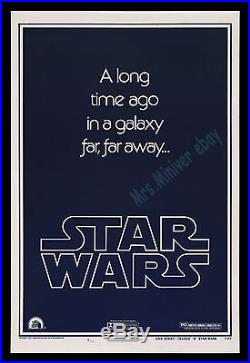 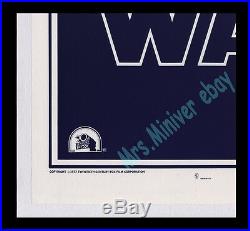 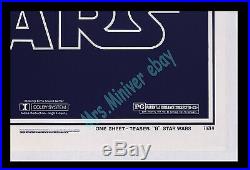 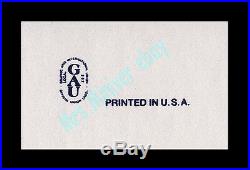 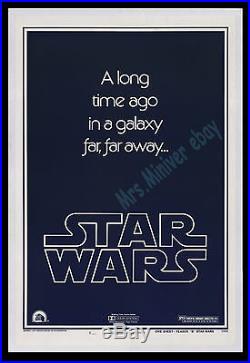 A LONG TIME AGO IN A GALAXY FAR, FAR AWAY.. OK - Here it is: A BONA FIDE ORIGINAL : 1977 NSS (National Screen Service) issued Star Wars Style "B" one-sheet Movie Poster. There's delicious dichotomy printed on this Style "B" Teaser one-sheet! George Lucas' legendary opening line to his 1977 masterpiece also made for an equally legendary - must have - movie poster!

For you new collectors, a "one-sheet" is a printer's term for what's considered to be the "standard" poster size, which was 27x41 inches back in those days. This one-sheet has the NSS printing code 77/21-0, which is THE ONLY ORIGINAL printing. Additionally, this is THE only style original Star Wars one-sheet 20th Century Fox didn't print their own version of. Genuine rolled originals of this teaser poster are hard to find, as almost 100% of all the National Screen Posters were issued folded prior to the 1980's.

This is not one of those. I call those "the Energizer Bunnies of posters, " because they keep on coming and coming.... Nevertheless, I'm not going to go into all the different ways one can to tell the original style "B" from the fakes (I'll save that for my encyclopedia on posters), but I'll point out two issues of pressing concern to most educated collectors. This poster has the all important GAU (Graphic Arts International) union stamp. This logo MUST be on the poster! If it's not, it's a bootleg! You'll hear dealers who are trying to sell their bootlegs expound a bunch of bunk about the "union" being on strike, in an effort to explain why their fake has no logo. Nevertheless, this is an undisputed bona fide ORIGINAL, and it HAS the all important original union stamp!

I fully designed and authored a Star Wars poster-collecting guide back in 1999 - It was published by Butterfields. I'm credited in the front of the guide.

We now know it was because the Tom Jung artwork found on the style "A"wasn't finalized in time for the film's opening. This teaser "B" was barely ready. CONDITION: This one-sheet is NearMINT ROLLED NEVER FOLDED & CLEAN! It was protected in a tube since 1977 and has recently been Archivally Museum Linen-mounted to flatten it out and protect it from damage, so it can be framed properly.

LINEN-MOUNTING is an accepted form of poster preservation by the Library of Congress and every Museum in the country. A lot of advanced poster buyers request and prefer linen-mounted posters because it makes framing and displaying the posters much easier.

Without the risk of damaging the original. The white you see in. Beyond that of the poster - is the white of the Japanese paper lining the linen border margin. You can see how easy it would be to damage the original poster without that extra margin of protection. The backing makes the poster much safer to handle - it GREATLY reduces the risk of damaging the original. Also, all of my linen-backed posters have been stored FLAT so they DO NOT have a curl to them - They're all ready for framing and display!

It can crash regardless of any decision you make and can even crash regardless of any decision made by the company related to the stock - Leaving you with a near worthless piece of paper that won't inspire anyone! The magnificence of art and historic documents have an inherent value that relates to civilization and society. Please write with any questions. If you're in the market for top quality original vintage movie posters or Star Wars, then please. The item "Star Wars B MOVIE POSTER 27x41 ROLLED NEVER-FOLDED ARCHIVAL MUSEUM LinenBACKED" is in sale since Tuesday, July 14, 2020. This item is in the category "Entertainment Memorabilia\Movie Memorabilia\Posters\Originals-United States\1970-79".