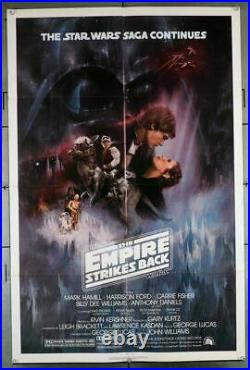 One-Sheet Poster (27x41) Folded Very Fine Condition. Original 20th Century-Fox Re-release one-sheet poster, the so-called "Gone With the Wind" style, for the Irvin Kershner science fiction adventure, THE EMPIRE STRIKES BACK (1980) starring Mark Hamill, Harrison Ford, Carrie Fisher, and Billy Dee Williams. This was the second film to come out in the STAR WARS series, and many critics consider it to be the best film in the original trilogy with a distinctive ÒdarkÓ side. The special effects were considerably better than the first movieÑfrom the amazing invasion near the beginning by the huge Imperial Walkers, reminiscent of Hannibal's use of elephants in the Punic Wars, to the ultra-exciting light saber duel between Luke and DarthVader at the conclusion.

In between, we are first introduced to Jedi master Yoda, who must try to train the impatient Luke in the ways of a Jedi warrior and who, in turn, became one of the more beloved characters in the entire Lucasfilm Universe. While STAR WARS is optimistic with a happy ending, this film explores the overwhelming power and relentless evil of the Dark Side. It begins gloomily and ends with just a glimmer of hope after a finale of betrayal and revelation. This original one-sheet poster with Roger Kastel artwork is folded and is in very fine condition.

The item "STAR WARS EPISODE V EMPIRE STRIKES BACK, THE (1980) M29371 Art by Roger Kast" is in sale since Sunday, December 6, 2020. This item is in the category "Entertainment Memorabilia\Movie Memorabilia\Posters\Originals-United States\1980-89". The seller is "movieart*austin*tx*usa" and is located in Austin, Texas. This item can be shipped worldwide.