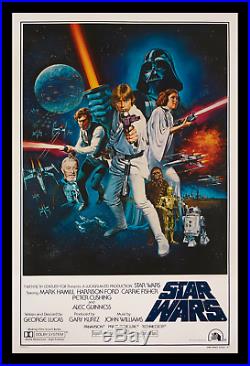 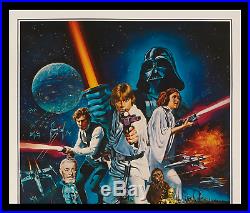 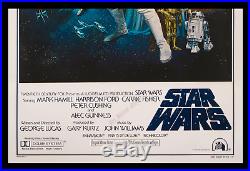 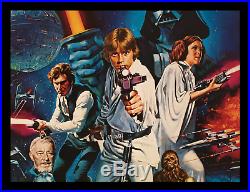 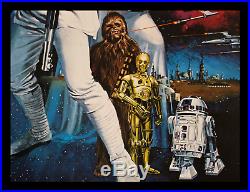 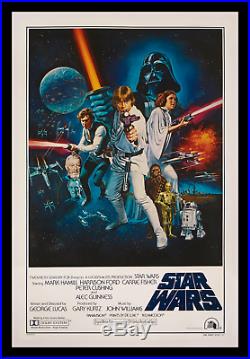 OK - Here it is. 1977 Style "C" International one-sheet Movie Poster. Star Wars became an overnight sensation in 1977. The film took the country by storm. There were unprecedented lines of people waiting around city blocks to HAPPILY see this film - repeatedly, no less. Word-of-mouth news about Star Wars had spread FAST around the globe and everyone was talking about it. By de facto, it served as a new drug in the age of free love. Originally, in the summer of'77 Star Wars had a very limited release. It could be found playing in just a few dozen cinemas, most of which were here in the United States, and so - globally - the anticipation to see the film surpassed even the 1960s moon walk.

Fox scrambled to get a poster out that matched the likenesses of the new Hollywood stars headlining the film. It was decided that the entire cast would be shown on the poster "Dirty Dozen" style with all their weapons blazing. In fact, the artwork was directly designed after the Dirty Dozen movie poster from the 1960's. The famed poster artist Tom Cantrell was commissioned, resulting in this spectacular artwork and more than colorful lithograph. The Star Wars Style "C" one-sheet was born, and the rest is history.

This has always been a rare original to get, as it was intended only for issue overseas in the UK and abroad. Unfortunately, a group of scum pirate criminals printed and distributed about 50,000 bootleg copies of this poster, and so the market has been perpetually confused as to authenticity. This is not one of those. I call those "the Energizer Bunnies of posters, " because they keep on coming and coming.... Nevertheless, I'm not going to go into all one-hundred and one different ways one can to tell the original style "C" from the fakes (I'll save that for my encyclopedia on posters), but I'll point out the two big issues of pressing concern to most educated collectors. Have the infamous "HAIR" on Princess Leia's back.

It's actually a hair (right at the base of Vader's chest-plate on Leia's back) that was caught in the duplication process when they photographed the original to bootleg it. It's one of the bootleg's most telltale signs - but - I wouldn't solely rely on it. I've seen dubious people carefully scratch the "hair" off with a needle so it wouldn't photograph in their listings. I found out about that trick the hard way, when I bought one that appeared not to have the hair. I admit my prices may not appear not to be a bargain.

I say, "appear" because it's my sincere belief that it's a bargain to be certain in what you're getting. Certainty is what all the fuss is about when it comes to certifications on autographs, baseball cards, and comic books. It's what all three of those collectable industries solely rely on. I'm a well-known expert. I fully designed and authored a Star Wars poster-collecting guide back in 1999 - It was published by Butterfields.

I'm credited in the front of the guide. I offer that guide with some of my listings see a photo of it in my listing with the.

1976 ORIGINAL Star Wars Corporation FLYER. I point this out because I want you to know that I can definitely authenticate Star Wars posters with 100% accuracy. THIS POSTER IS THE REAL DEAL. Also, it's important to BEWARE of any dealer who advertises a Star Wars poster as a bootleg. These are greedy dealers who think it's OK to destroy the hobby by circulating bootlegs because they tell you upfront that it's a bootleg. They're knowingly distributing bootlegs for personal profit. It's criminal and unscrupulous. Some poster masterpiece sellers think it's OK because they say they stamp the back as fake.

It's again, distributing bootlegs knowingly. That's NOT integrity - that's BUNK! I wouldn't trust them unless they stamped the FRONT of the poster with a mark that clearly states, BOOTLEG! - like they do with fake coins and currencies in that well-established hobby.

Help stop this criminality - speak out! This one-sheet was originally tri-folded, which means it didn't have the center fold going down the 41 inch length of the poster.

The poster is SOLID NearMINT & clean! ALL of these original international 1-sheet posters were issued folded overseas, and so I had this poster museum linen-mounted to smooth-out the standard folding. It worked, because the poster came out perfectly! I used the best conservator in the USA.

He ONLY uses high-grade materials, such as thicker linen and thicker acid-free Japanese rice paper. The better materials cost more but make a real difference in the end result.

It's flat as a pancake and clean! Is an accepted form of poster preservation by the Library of Congress and every Museum in the country. A lot of advanced poster buyers request and prefer linen-mounted posters because it makes framing and displaying the posters much easier - without the risk of damaging the original.

The white you see in. Beyond that of the poster - is the white of the Japanese paper lining the linen border margin. You can see how easy it would be to damage the original poster without that extra margin of protection. The backing makes the poster much safer to handle - it GREATLY reduces the risk of damaging the original. Also, all of my linen-backed posters have been stored FLAT so they DO NOT have a curl to them - They're all ready for framing and display!

The magnificence of art and historic documents have an inherent value that relates to civilization and society. This poster is definitely ECONOMY PROOF! Please write with any questions. If you're in the market for top quality original vintage movie posters or Star Wars, then please. The item "Star Wars GENUINE STYLE C MOVIE POSTER TRI-FOLD ARCHIVAL MUSEUM LINEN-MOUNTED" is in sale since Saturday, November 2, 2019. This item is in the category "Entertainment Memorabilia\Movie Memorabilia\Posters\Originals-United States\1970-79".