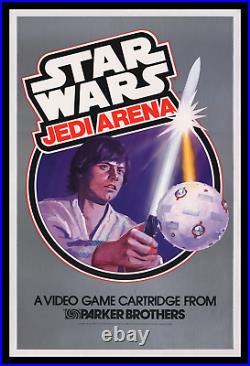 Here's a piece that represents THREE Goliath entities in entertainment that reigned supreme during the latter half of the 20th Century: Atari, Star Wars, and PARKER BROTHERS GAMES. Star Wars: Jedi Arena is a followup to the wildly successful Empire Strikes Back video game issued by Parker Brothers just months before the release of this early Star Wars classic. It's a lightsaber battle video game written by Rex Bradford for the Atari 2600. Guinness World Records 2017 Gamers Edition cites this particular video game to be the first to feature lightsabers, a significant fact.

Beyond that, this poster is a rocking lithograph and one of the most graphically appealing of the 1980s! That's its GREAT strength.

The 1980's: If you're lucky enough to remember way back then - over three decades ago - you might remember the initial swell of interest in Star Wars - it was a full out sensation; i. T's when movies meant Star Wars! That's really what's advertised on this amazing litho, Star Wars, with Mark Hamill in his classic pose from the legendary scene where Ben Kenobi trains him to be a Jedi for the first time.

F you were alive in the early'80s, you'll remember it was when "video gaming" basically meant Atari. The three products advertised on this more than rare poster were all smack dab center of it all - all, meaning the entertainment world. This poster reminds me a lot of them. It's classic nostalgia and pop culture at its very best.

This poster was made solely for advertising purposes. It would hang in those stores who offered the Atari and Parker Brothers products. In fact, in my nearly 40 years of collecting Star Wars posters, I've only seen a scant few originals hit the market. This is one of the seminal Star Wars movie posters and product advertising displays one can find. This poster was issued 23.25x36 inches.

SOLID C-9 NearMINT ROLLED NEVER-FOLDED ARCHIVAL MUSEUM LINEN-MOUNTED CONDITION. Designed and printed WITHOUT a white border. They call that a full "Bleed" in the advertising industry. It makes it much harder to handle a poster if it's a full Bleed, and so I had the poster museum linen-mounted so it can be safely framed. Also, this fantastic lithograph was made with special metallic silver ink, which is FRAGILE, and so finding it in this extraordinary condition is nearly impossible - if you can even find it at all!

I used the best conservator in the USA. He ONLY uses high-grade materials, such as thicker linen and thicker acid-free Japanese rice paper. The better materials cost more but make a real difference in the end result. It's flat as a pancake and as clean as can be. It's quite an eye catching display for any collection.

Check out the DIRECT HIGH-RES PHOTO I'VE POSTED OF THE ACTUAL POSTER YOU'LL BE GETTING! LINEN-MOUNTING is an accepted form of poster preservation by the Library of Congress and every Museum in the country. A lot of advanced poster buyers request and prefer linen-mounted posters because it makes framing and displaying the posters much easier - ESPECIALLY on borderless posters. As I pointed out, this poster was made with a BLUE border only. The white you see in the photo is the white of the Japanese paper lining the linen border margin. You can see how easy it would be to damage the original poster without that extra margin of protection.

IT WILL BE PROFESSIONALLY PACKAGED IN A CRUSHPROOF TUBE! Ben Obi-Wan Kenobi Anthony Daniels.... It can crash regardless of any decision you make and can even crash regardless of any decision made by the company related to the stock - Leaving you with a near worthless piece of paper that won't inspire anyone! The magnificence of art and historic documents have an inherent value that relates to civilization and society. Please write with any questions.

If you're in the market for top quality original vintage movie posters or Star Wars, then please. The item "STAR WARS JEDI ARENA ATARI MOVIE POSTER STORE DISPLAY MUSEUM LINEN-MOUNTED" is in sale since Tuesday, July 14, 2020. This item is in the category "Entertainment Memorabilia\Movie Memorabilia\Posters\Originals-United States\1970-79".miniver" and is located in Studio City, California. This item can be shipped worldwide.