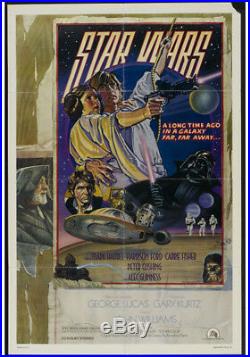 Original Style D One Sheet movie poster (27x41). Here is the very rare style D one sheet. However, this is the "Studio" issued one sheet.

Although Star Wars poster are some of the most "pirated" posters in history, the style D one sheets have no known pirated copies. There were however three issues of this poster. The NSS release which has the GAU logo and NSS on the bottom border, the studio release which does not have the GAU logo and has ONE-SHET STYLE D on the bottom right and then there was a reprint in 1992 which is clearly identified in the bottom right (and has no quotes around the D like the 1977 studio release and the reprint was rolled NOT machine folded). Of all these poster releases the studio release is by far the most scarce. Rarely does it appear on the market.

Reviewing a couple of the most inventory rich dealers with Star Wars posters, we could only find several of the NSS release versions. This studio release is one of the first we have seen in a long time. The condition is excellent with only typical fold lines and a small chip out of the right top border, not affecting any of the poster image area. Star Wars (20th Century Fox, 1977).