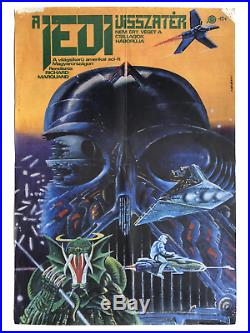 Rare, original poster artwork for the Hungarian poster of the famous Star Wars episode, Return of the Jedi. The poster is one of the emblematic science-fiction designs by Helenyi Tibor who first made a painted artwork later to be reproduced as posters. His work caught the atmosphere of the movie, but he created a new, original vision that make his works one of the most sought after items amongst Star Wars poster collectors.

For instance his amazing choice forming one of Vaders eyes with the second Death Star form is one of the many smart techniques his posters are equipped with. The scarcity and the amazing painterly approach of expression together with the grotesque visual world make this piece a true specialty. Helényi himself said in an interview he did not want to paint posters similar to the Western European and US posters, so he let his imagination and his own artistic vision work. He even added extraneous elements to the posters, just for his own amusement.

Helényis contribution to poster art is simply unique, and thereof worth the interest of anyone exploring graphic design works. His grandiose painting style fits the monumentality of science fiction and blockbuster movies. In his paintings, he uses the perspective in a spectacular way, and he unites this with solutions that resemble comic books or film strips.

On his pictures, the picturesque details appear next to rough, bare, exposed areas of canvas. Most of his paintings depict highly realistic figures and strong distortions. Helényis brilliant painting and drawing skills are apparent on his posters.

Helényi designed posters for many of the classic Sci-Fi movies of the era, such as Alien, the Star Wars series, Close Encounters of the Third Kind, Robocop, etc. He was able to materialise monumental, utopistic landscapes and a grand montage of main characters and other important elements. His typographic solutions perfectly fit into the unity of the compositions of his posters. Besides this rare occasion, hardly ever any of his works appear at auctions and currently his posters are so scarce, it is an event in itself if one turns up. The item "STAR WARS Return of the Jedi Original Hungarian Poster by Helenyi 1984 1st Print" is in sale since Monday, June 3, 2019.

This item is in the category "Entertainment Memorabilia\Movie Memorabilia\Posters\Originals-International\1980-89". The seller is "youknowwhy33" and is located in Szeged. This item can be shipped worldwide.