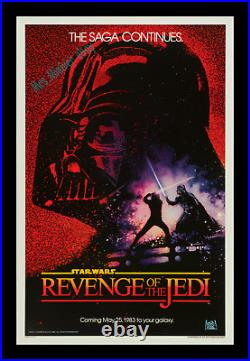 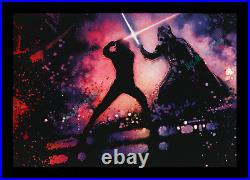 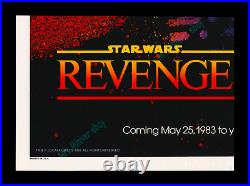 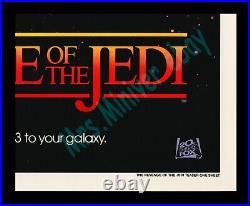 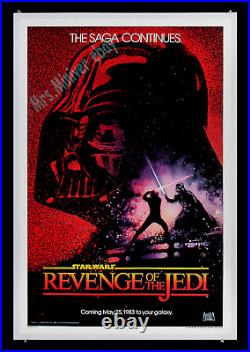 THIS IS AN ORIGINAL- BEWARE OF FAKES! ROLLED NEVER-FOLDED ARCHIVAL MUSEUM LINEN-MOUNTED! A GENUINE, ORIGINAL 1982 20th Century-Fox issued Revenge of the Jedi Advance one-sheet. It's NOT a reprint, and, it's NOT a bootleg, this is the REAL McCoy. The Revenge one-sheet is the most copied, commemorated, and, the most counterfeited movie poster in the world! That's because it's so great! It's always been a huge demand item - the unbelievable artwork by Drew Struzan coupled with the film's "politically correct" title change has made this poster one for the record books.

Fox issued this Advance Teaser 1-sheet back in 1982. Shortly thereafter, Lucas realized how silly it would be for a Jedi to lose his cool seeking REVENGE, and so he changed the title to The Return of the Jedi. " Immediately, all the original "Revenge posters were pulled from the official advertising campaign. This particular copy has been coveted ever since that hubbub initially happened.

It is as advertised - REAL & ROLLED / NearMINT & NEVER FOLDED! I had this poster museum linen-mounted because, increasingly, the vast majority of all my advanced poster buyers request backed posters. The backing makes the poster much safer and easier to handle - it GREATLY reduces the risk of damaging the original. I used the best conservator in the USA. He ONLY uses high-grade materials, such as thicker linen and thicker acid-free Japanese rice paper. The better materials cost more but they make a real difference in the end result. This poster was VERY FINE ++ to NearMINT before I had it linen-mounted! There was never any paper loss or tears or anything seriously wrong about this poster. Now the poster presents as SOLID NearMINT!

Is an accepted form of poster preservation by the Library of Congress and every Museum in the country. Except for one or two. Every one of the top twenty. Were all linen or paper-mounted. A lot of advanced poster buyers request and prefer linen-mounted posters because it makes framing and displaying the posters much easier.

Without the risk of damaging the original. The white you see in photo #5. Beyond that of the poster.

Is the white of the Japanese paper lining the linen border margin. You can see how easy it would be to damage the original poster without that extra margin of protection. The backing makes the poster much safer to handle - it GREATLY reduces the risk of damaging the original.

Also, all of my linen-backed posters have been stored FLAT so they. DO NOT have a curl to them. They're all ready for framing and display! If you've been looking for a genuine Revenge of the Jedi 1-sheet - make sure it's indeed an original by getting it from a genuine Star Wars poster expert.

It more than makes up for what appears not to be a bargain price. I say "appears" because it's my sincere belief that it's a bargain to be certain in what you're getting. Certainty is what all the fuss is about when it comes to certifications on autographs, baseball cards, and, comic books. It's what all three of those collectible industries solely rely on. There is NO other dealer in the country that can say the same! I'm a well-known expert. In fact, I'm the #1 genuine Star Wars poster expert in the world! Additionally, I fully designed and authored a Star Wars poster-collecting guide back in 1999 - It was published by Butterfields. I'm credited in the front of the guide.

I offer that guide with some of my listings see a photo of it in my listing titled. STAR WARS ADVANCE 1977 HERALD FLYER SET. I point this out because I want you to know that I can definitely authenticate Star Wars posters with 100% accuracy. THIS POSTER IS THE REAL DEAL.

Also, it's important to BEWARE of any dealer who advertises a Star Wars poster as a bootleg. These are greedy dealers who think it's OK to destroy the hobby by circulating bootlegs because they tell you upfront that it's a bootleg. They're knowingly distributing bootlegs for personal profit. It's criminal and unscrupulous.

Please write with any questions. If you are in the market for top quality original vintage movie posters or Star Wars, then please.

This item is in the category "Entertainment Memorabilia\Movie Memorabilia\Posters\Originals-United States\1980-89".miniver" and is located in this country: US. This item can be shipped worldwide.