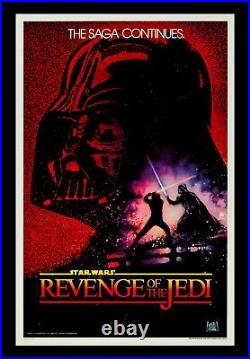 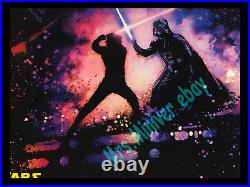 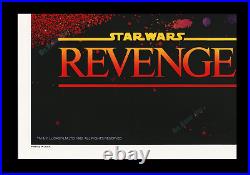 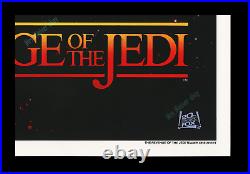 THIS IS AN ORIGINAL- BEWARE OF FAKES! A GENUINE, ORIGINAL 1982 Fox issued Revenge of the Jedi No-Date Advance one sheet. It's NOT a reprint, and, it's NOT a bootleg, this is the REAL McCoy.

The Revenge one-sheet is the most copied, commemorated, and, the most counterfeited movie poster in the world! That's because it's so great!

It's always been a huge demand item - the unbelievable artwork by Drew Struzan, coupled with the film's "politically correct" title change, make this one for the record books. Fox issued this Teaser back in 1982. There were TWO versions printed. Both are documented on the 1985 Lucasfilm authorized Star Wars Checklist poster. The FIRST version was printed only once - that's the NO-DATE version offered here in this listing.

It was exclusively issued to the movie theaters - early on - BEFORE 20th-Century-Fox settled on a certain release date for the film. The SECOND version was printed after the finalization of the May 25th 1983 release date, which was placed at the bottom of the poster. The first NO-DATE version is SIGNIFICANTLY rarer. In fact, it's one of the rarer and most sought after Star Wars posters in the hobby! The Checklist poster states that. There were ONLY a handful of these no-date posters made. The story gets even better! After going through the trouble of printing both versions of the poster, George Lucas had an eleventh hour epiphany when he suddenly realized how silly it would be for a Jedi to loose his cool seeking REVENGE, and so he changed the title of the movie to The Return of the Jedi. " Immediately, all the original "Revenge posters (date and no-date) were pulled from the official advertising campaign. This particular NO-DATE original has been coveted ever since all that hubbub initially happened. REAL, ROLLED and in TOP C-9.5 ORIGINAL CONDITION!! It measures the full 27x41 inches. This poster is truly one of the MUST HAVE Star Wars posters - Especially in thisTOP NearMINT+ ORIGINAL CONDITION! I just posted DIRECT high-resolution scans of the actual poster I'll be sending you! I scanned the close-up sections (see photos #2,3&4) so you can really see how nice it is. This poster has been been stored FLAT since the 1980s between acid-free paper, and so - NO CURL!! Try and find that elsewhere. When it arrives just lay it flat for a day or so and the poster will relax and remain flat for framing and/or art storage. It's VERY hard to find authentic original rolled copies of this 1982 NO-DATE poster, especially in this fantastic uncurled condition! Like they say in Jersey, Forget about it....

If you've been looking for an ORIGINAL Revenge of the Jedi in TOP shape - then this one is for you! This Revenge Teaser one-sheet ranks right up there with the Star Wars Mylar and Happy Birthday posters, as well as holding its own against the original John Williams Concert poster. It's truly one of the most sought after original film posters ever created.

If you've been looking for a genuine Revenge of the Jedi NO-DATE - make sure it's indeed an original by getting it from a genuine Star Wars poster expert. I admit my prices are sometimes advanced, but the service and guarantee I provide is equally advanced. It more than makes up for what appears not to be a bargain price. I say "appears" because it's my sincere belief that it's a bargain to be certain in what you're getting.

Certainty is what all the fuss is about when it comes to certifications on autographs, baseball cards, and, comic books. It's what all three of those collectible industries solely rely on. There is NO other dealer in the country that can say the same! I'm a well-known expert.

In fact, I'm the #1 genuine Star Wars poster expert in the world! Additionally, I fully designed and authored a Star Wars poster-collecting guide back in 1999 - It was published by Butterfields. I'm credited in the front of the guide.

I offer that guide with some of my listings see a photo of it in my listing titled. STAR WARS ADVANCE 1977 HERALD FLYER SET. I point this out because I want you to know that I can definitely authenticate Star Wars posters with 100% accuracy.

THIS POSTER IS THE REAL DEAL. Also, it's important to BEWARE of any dealer who advertises a Star Wars poster as a bootleg. These are greedy dealers who think it's OK to destroy the hobby by circulating bootlegs because they tell you upfront that it's a bootleg. They're knowingly distributing bootlegs for personal profit.

It's criminal and unscrupulous. Some poster masterpiece sellers think it's OK because they say they stamp the back as fake. It's again, distributing bootlegs knowingly. That's NOT integrity - that's BUNK! I wouldn't trust them unless they stamped the FRONT of the poster with a mark that clearly states, BOOTLEG!

- like they do with fake coins and currencies in that well-established hobby. Help stop this criminality - speak out! 100% GUARANTEED ORIGINAL THEATRICAL POSTER!!

Han Solo Billy Dee Williams.... Princess Leia Organa Peter Cushing.... Grand Moff Tarkin Alec Guinness.... Ben Obi-Wan Kenobi Anthony Daniels.... Darth Vader James Earl Jones.... It can crash regardless of any decision you make and can even crash regardless of any decision made by the company related to the stock - Leaving you with a near worthless piece of paper that won't inspire anyone! The magnificence of art and historic documents have an inherent value that relates to civilization and society. Please write with any questions. If you are in the market for top quality original vintage movie posters or Star Wars, then please. This item is in the category "Entertainment Memorabilia\Movie Memorabilia\Posters\Originals-United States\1980-89".miniver" and is located in this country: US. This item can be shipped worldwide.