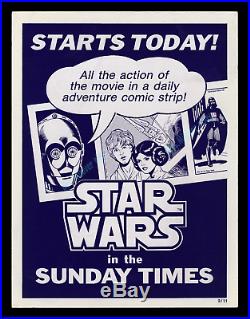 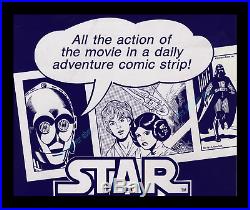 RUSS MANNING COMIC STRIP ART! Here's one of the most interesting and charming Star Wars advertising pieces released in the 1970s. An Original Poster [or Kiosk card] made to advertise the Star Wars 1979 Newspaper Comic Strip. Star Wars was a worldwide sensation back in 1979.

Globally, the film had been playing for more than a year straight in the cinemas. Lucas, being a comic art aficionado, decided to hire artist Russ Manning to render strips serializing the. Of the film in a seven-part series. It was a good move because this became one of the most successful campaigns on "Star Wars" outside of the film. Some of the newspapers premiering the strip printed newsstand advertising posters announcing it's coming to drum up sales and subscriptions. This LA Sunday Times iteration is simply THE nicest and most charming, as it is one of the only posters made that actually shows the Russ Manning strip art. It also carries the all important Black Falcon Ltd. This poster is one of the rarest 1970's Star Wars posters.

In my over 40 years of avidly collecting Star Wars posters, I've only seen THREE (3) of these originals! This being one of them.

This poster is in VERY FINE +++ to. In the US - just a couple of scuffs and whatnot. So you can see just how terrific this baby truly is!

This is one of the nicest Star Wars advertising displays ever made! Princess Leia Organa Peter Cushing.... Grand Moff Tarkin Alec Guinness....