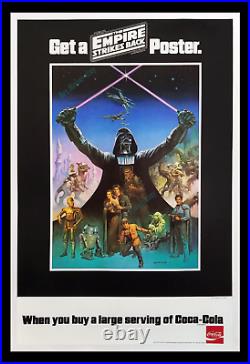 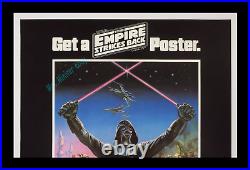 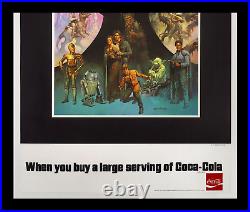 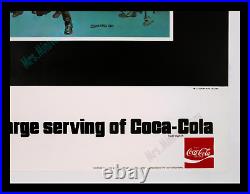 >>>NOT WIDELY KNOWN TO EXIST! THE ELITE MUST HAVE STAR WARS!

Here is no question one of THE RAREST of all the Star Wars MOVIE THEATER One-Sheets (27x41 inches) ever issued - BARE NONE! BONA FIDE 1980 ORIGINAL "Empire Strikes Back" BORIS VALLEJO. COKE 1-sheet was made to promote the wildly successful Coca-Cola poster offer in the movie theaters. It was ONLY sent out for the original opening of the film back in 1980, to the theaters that participated in the Coca-Cola Boris poster giveaway promotion.

Not all theaters playing Empire offered Coca-Cola, some only Pepsi, and so this rare 1-sheet saw was a very limited distribution. That's why it's so rare!

It wasn't issued again, and, most theaters didn't save this poster, as this was a limited time offer. I know there are a LOT of people who are looking to complete their original collections of one-sheets released for the original Star Wars Trilogy. In fact, in the mid 1980's, there was a "Checklist Poster" published by Killian Enterprises that tried to capitalize on this common quest.

Because the "Checklist" poster was produced as a labor of greed (not love), in the end, it turns out that there were DOZENS of posters overlooked and dismissed right off the list because of the slack efforts put forth in doing proper research. Needless to say, this 1980 original 27x41 inch rarity is one of the most glaring omissions! Heck, that junky "Checklist" was put together in a such a slipshod way that they list posters on it that weren't even produced , and so discount any info on that early collector's edition, as it was assembled by amateurs who were looking to make a quick buck. If you're looking to complete your Star Wars 1-sheet collection, obviously, this original is a MUST!

This rare beauty is in VERY FINE+ CONDITION!! This poster was sent to the movie theater folded with the stock of Boris Vallejo posters that are advertised on it. I recently had it gloriously museum linen-mounted by the best mounter in the USA.

All 100% archival materials were used! It worked like a charm, because this baby came out terrific, now presenting as a NearMINT BEAUTY! You can hardy tell it was folded! Additionally, almost all of my buyers request linen-backed posters, especially when a poster (like this one) has NO WHITE BORDER. That's how this was issued, as a "bleed" on three sides. The backing makes framing and displaying "bleed" posters easy and safe - without the risk of damaging the original. Is an accepted form of poster preservation by the Library of Congress and every Museum in the country. A lot of advanced poster buyers want and prefer linen-mounted posters because it makes framing and displaying the posters much easier - ESPECIALLY on borderless posters.

As I pointed out, this poster was made without a white border on top and the two sides. The white you see in the photo beyond the black is the white of the Japanese paper lining the linen border margin.

You can see how easy it would be to damage the original poster without that extra margin of protection. The backing makes the poster much safer to handle - it GREATLY reduces the risk of damaging the original. Also, all of my linen-backed posters have been stored FLAT so they DO NOT have a curl to them - They're ready for framing and display!

The magnificence of art and historic documents have an inherent value that relates to civilization and society. Please write with any questions. If you're in the market for top quality original vintage movie posters or Star Wars, then please. This item is in the category "Entertainment Memorabilia\Movie Memorabilia\Posters\Originals-United States\1980-89".