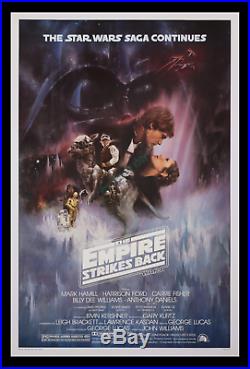 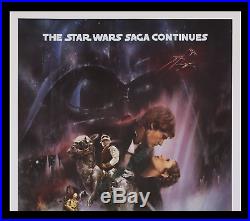 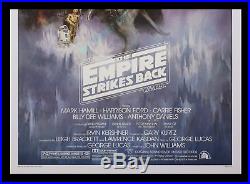 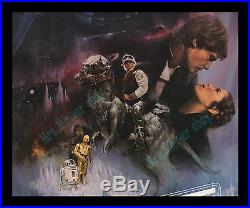 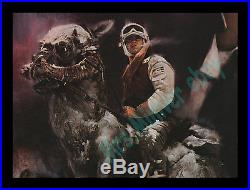 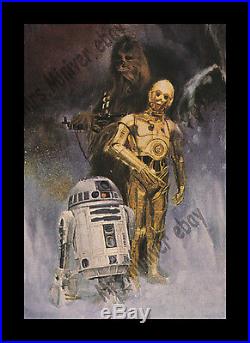 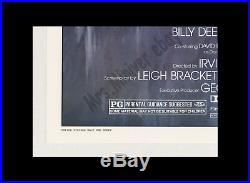 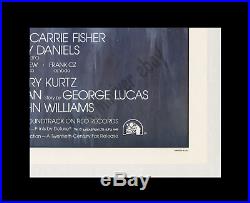 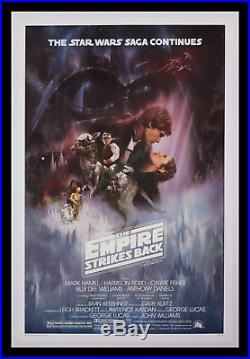 Originally referred to as the "Gone With the Wind, " this artwork became known as the style "A" only by default. Billy Dee Williams questioned why he wasn't pictured on it (along with all of the other billed actors) at the film's premiere. 20th Century-Fox and Lucasfilm didn't have a good answer to Williams' surprise inquiry, leaving both studios standing there with a mess of egg splattered all over their faces. They scrambled quickly to issue the style "B" artwork with a small but clear image of Lando Calrissian, Billy Dee's now famous movie character. This glorious style "A" artwork was then immediately suspended - both companies dropping it from their primary campaigns to avoid any chance of undo publicity - rendering the "Gone With the Wind, " gone with the wind.

THIS IS 100% GUARANTEED ORIGINAL RARE 1980 PRINTING. This is one of the few original 1-sheets that was issued to the theaters ROLLED before all the Billy Dee hubbub. It was issued by 20th Century-Fox directly. I was lucky enough to get this beauty, way back then, over 35 years ago!

I've personally held it until now. Hopefully, some lucky new owner can enjoy it for the next 35 years.

This fantastic rarity is in MINT/NearMINT ROLLED NEVER-FOLDED CONDITION!! If you're looking for a clean one, and who's not, this would be it! It was protected in a tube since 1977. And has recently been Archivally Museum Linen-mounted to flatten it out and protect it from damage, so it can be framed properly. It worked like a charm because the poster came out terrific!

I used the best conservator in the USA. He ONLY uses high-grade materials, such as thicker linen and thicker acid-free Japanese rice paper.

The better materials cost more but make a real difference in the end result. It's flat as a pancake and as nice as can be. A finer Star Wars poster display would be hard to get, maybe impossible.

This poster is class all the way! Let's face it, if you've looked - then you've learned - this poster is HARD to find in clean. Almost all of these are now screwed up in some kind of significant way. Is an accepted form of poster preservation by the Library of Congress and every Museum in the country.

A lot of advanced poster buyers request and prefer linen-mounted posters because it makes framing and displaying the posters much easier. Without the risk of damaging the original.

You can see how easy it would be to damage the original poster without that extra margin of protection. The backing makes the poster much safer to handle - it GREATLY reduces the risk of damaging the original. Also, all of my linen-backed posters have been stored FLAT so they DO NOT have a curl to them - They're all ready for framing and display! If you're looking for an investment/museum quality item.

The magnificence of art and historic documents have an inherent value that relates to civilization and society. Please write with any questions. If you're in the market for top quality original vintage movie posters or Star Wars, then please. The item "Star Wars THE EMPIRE STRIKES BACK 1980 MINT/ROLLED NEVER-FOLDED MOVIE POSTER" is in sale since Saturday, June 1, 2019.