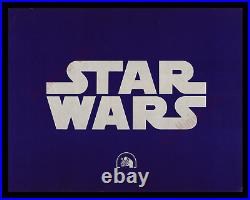 RARE - ROADSHOW 11x14 TITLE CARD! AS SEEN AT THE 1977 PRESS CONFERENCE WITH HARRISON FORD & CARRIE FISHER! Here is simply one of the rarest original movie theater items ever issued to the US cinemas in the 1970's.

AN 11x14 inch TITLE LOBBY CARD MOVIE POSTER for the 1977 early Roadshow release of Star Wars! This one is so rare that many advanced collectors don't even know of its existence.

This card was only printed once and only issued once, early on, at the beginning of the Star Wars roadshow release in May of 1977. In fact, 20th Century-Fox used one of the original Title Lobby Cards at one of the earliest press conferences with Harrison Ford and Carrie Fisher. Check out photo #2 that I've posted! Star Wars opened in only 32 theaters worldwide in 1977. That was considered to be the roadshow release.

The very first set of 11x14 lobby cards issued to some of those theaters included this extraordinarily rare title lobby card. All the subsequent sets were printed and issued without this card, and so this is more than a rare piece - it's practically non-existent, with only a small handful known to have survived. It's fantastic and simplistic design says it all! Certainly, no serious Star Wars collection is complete without this card. If you're a lobby card collector this is a real treat, as very few films from the 1970's released any title lobby cards for promotional purposes.

Happily, and, luckily, 20th Century-Fox made this beauty. This card was definitely issued domestically to US theaters, as this one was found here in the US at a theater find in Detroit. This card is in VERY FINE++ CONDITION! SEE DIRECT HIGH-RES SCANS OF THE ACTUAL CARD YOU WILL BE GETTING! This card was used but still in nice shape.

It would be hard to find a better one - that is, if you can find it at all. Ben Obi-Wan Kenobi Anthony Daniels....

It can crash regardless of any decision you make and can even crash regardless of any decision made by the company related to the stock - Leaving you with a near worthless piece of paper that won't inspire anyone! The magnificence of art and historic documents have an inherent value that relates to civilization and society. This poster is definitely ECONOMY PROOF! Please write with any questions. If you're in the market for top quality original vintage movie posters or Star Wars, then please. This item is in the category "Entertainment Memorabilia\Movie Memorabilia\Posters\Originals-United States\1970-79".