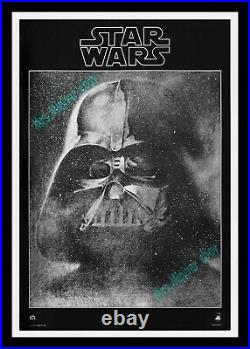 RARE 1977 FOX ISSUE VADER MYLAR POSTER!! Here is a BONA FIDE ORIGINAL 1977 FOX issue Vader Mylar poster - ROLLED! Even some of the most hard-core Star Wars poster collectors haven't seen this one, or simply haven't been able to get it! In 1977 when Star Wars was just released 20th-Century-Fox issued this Darth Vader Mylar poster to advertise the now legendary Star Wars soundtrack album in the record stores. This poster was used EXCLUSIVELY TO ADVERTISE the movie and the album! This poster was NOT distributed to the public. It was NOT for sale or given away.

That is why it's so rare. It's so rare that the editors of the official Star Wars Checklist poster (published in 1985) DID NOT include this on the poster. They put the two one sheets issued to advertise the soundtrack (style A & D) on the poster but not this mylar. Other smaller posters such as the Concert poster, the Howard Chaykin poster and the two NPR radio posters as well as the half sheet are all on the poster but not this - They must not have been unaware of its existence. EXCLUSIVELY MADE TO ADVERTISE the movie and the album in the record stores.

>>>NOT distributed to the public >> FEW SURVIVED! This poster measures approximately 22x33 inches and is printed on a mirror-like mylar stock in 1977. This poster damages easily so it is almost IMPOSSIBLE to find this one in this clean condition - if you can find it at all! It's a tough one to photograph, given the mirror-reflective nature of the piece, and so the photo isn't the greatest - but - you get the idea.

This poster was stored rolled up since 1977, when I obtained it. Amazingly, it ONLY had minor aging and a few minor dings and such from being rolled and unrolled for so many years ago, and so I had this poster museum linen-mounted to preserve it and make it easier to handle. It worked like a charm because the poster came out terrific! I used the best conservator in the USA. He ONLY uses high-grade materials, such as thicker linen and thicker acid-free Japanese rice paper.

The better materials cost more but make a real difference in the end result. It's flat as a pancake, even flatter. This poster was in ROLLED NEVER-FOLDED NearMINT CONDITION before I had it museum linen-mounted. Is an accepted form of poster preservation by the Library of Congress and every Museum in the country.

A lot of advanced poster buyers request and prefer linen-mounted posters because it makes framing and displaying the posters much easier - without the risk of damaging the original. The white you see in the photo beyond that of the poster is the white of the Japanese paper lining the linen border margin. You can see how easy it would be to damage the original poster without that extra margin of protection.

The magnificence of art and historic documents have an inherent value that relates to civilization and society. Please write with any questions. If you're in the market for top quality original vintage movie posters or Star Wars, then please. The item "Star Wars VADER MYLAR IN STORE Movie Poster Display! MUSEUM LINEN-MOUNTED" is in sale since Tuesday, July 14, 2020.